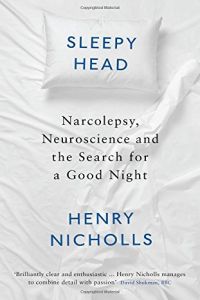 As science journalist Henry Nicholls explains, his book is not a self-help tome about how to get a good night’s sleep. For Nicholls, trying to sleep is an unwelcome struggle. He received a diagnosis of narcolepsy at the age of 21, and has been living with the sleep disorder and its accompanying pathologies for decades. His personal experience launched this expedition into the science of sleep disorders, including cataplexy, sleep paralysis, sleep apnea, hypnagogia and insomnia, which is interesting but at times lacks depth and clarity. Anyone with an interest in sleep science, or anyone who experiences difficulties with sleep, will find Nicholls’s research compelling.

When Henry Nicholls was 21, he began having difficulty staying awake during the day. Naps did not lift his brain fog or refresh him. He tried to hold sleep at bay by running in place, pinching himself or singing aloud. A year and a half later, Nicholls received a diagnosis of narcolepsy. He was lucky. Most people with narcolepsy lack a diagnosis for about 15 years.

Narcolepsy and other sleep disorders elude diagnosis because medical students receive little training in sleep and sleep disorders, and few primary care physicians are knowledgeable on the topic. Doctors often mistake the symptoms for depression or epilepsy. Humans need between six and eight hours of sleep a night, but not everyone needs the same amount. Variation in sleep patterns and the reluctance of people who suffer sleep problems to seek medical help contribute to the lack of accurate diagnoses.

People with narcolepsy can suffer cataplexy (in which intense emotions cause muscles to shut down), sleep paralysis, disjointed sleep, and terrifying nocturnal visions or hallucinations.

The Controversial Correlates of Consciousness
9
Why Do We Need to Sleep?
8
The Telomere Effect
9