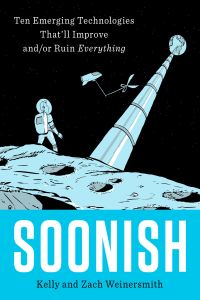 Biosciences professor Kelly Weinersmith and cartoonist Zach Weinersmith explain a common observation – that most people who predict the future get it wrong – and challenge it cheerfully. Supported by gleeful illustrations, they discuss possible advances in 10 areas. They establish their geek cred with cartoons, references to science fiction and almost giddy asides on Canadian ballistic experts, scientific authorities named Elvis and gophers who thwart scientific experiments.

People who try to predict the future usually get it wrong, but here are some areas where tech may cause revolutionary changes.

Predicting the future is easy. Everybody does it. Most people get the future wrong, and professional experts should know better than to try. Scientific and technological advances don’t proceed linearly. Discoveries in one area enable advances in other, apparently unrelated areas, driving progress in unexpected directions.

Nonetheless, in the relatively near future you can expect advances in space, science and technology, biology and medicine.

Space travel is really expensive. Making it cheaper could be revolutionary.

Going into space on today’s rockets is incredibly expensive. Making space travel cheaper would be revolutionary. Currently, 80% of the mass of a rocket launch is propellant, 16% is the ship and the payload – which could be astronauts – is at most 4%. Today, companies or government space agencies use rockets once and then discard them. Innovators could make rockets cheaper by reusing them, and creating models that use “less propellant.” Both changes are difficult. Rockets carry their own propellant – like driving...

The Little Reactors that Could
8
The Globotics Upheaval
9