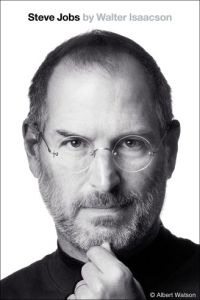 Here is a topic that, worldwide, needs no introduction or explanation. However big the Apple brand might be, Steve Jobs’s brand equals it. You’ll notice that unlike nearly any other biography and unlike every other biography by prolific author Walter Isaacson, Steve Jobs has no subtitle. It doesn’t need one. As monarchs do, Jobs chose his own biographer, and he chose wisely. Isaacson’s credentials as a journalist and author are impeccable. He’s the former chairman of CNN, former managing editor of Time magazine, and president and CEO of the Aspen Institute. Isaacson’s other books include The Innovators, also a bestseller.

Walter Isaacson is the former chairman of CNN, former managing editor of Time magazine, and president and CEO of the Aspen Institute. He also wrote the best-selling biographies The Innovators: How a Group of Inventors, Hackers, Geniuses, and Geeks Created the Digital Revolution; American Sketches; Einstein: His Life and Universe; Benjamin Franklin: An American Life; and Kissinger: A Biography. Isaacson and Evan Thomas co-authored The Wise Men: Six Friends and the World They Made.

Walter Issacson wrote this exhaustive, extensively researched biography at Steve Jobs’s request – but not under Jobs’s control – soon after Jobs received his fatal cancer diagnosis. Isaacson explains how Jobs’s idiosyncratic interests related to one another and contributed to his success. The author doesn’t stint on tales of Jobs’s particular views on pretty much every subject, including his own illness. And, he illuminates his subject’s personality as he shows how Jobs revolutionized multiple industries.

Jobs was a perfectionist even as a child.

Someone who knew Steve Jobs as a child might not have thought he’d ascend to the top of the business world by founding and running the “world’s most valuable company.” As Isaacson reports, his origins were modest, but even as a kid, Jobs displayed the curiosity, audacity and force of will that characterized his career. Adopted as an infant, he felt “chosen,” but battled lifelong residual feelings of abandonment. As a child, he was wildly precocious, brash and smart. In fourth grade, he tested at the level of a tenth grader.