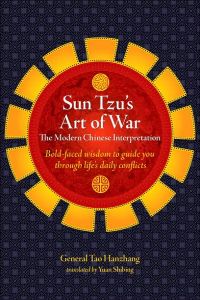 Sun Tzu was ancient China’s most renowned general. His classic text on strategy survived through the centuries and is still as applicable to war, politics and economics today as it was when Sun Tzu first drafted it. Many translations of Sun Tzu’s manuscript are available, but this one is both attractive and focused. General Tao Hanzhang supplements the actual text with his commentary. Since he spent his entire professional life as a soldier, his interpretation makes Sun Tzu’s guidance more applicable to contemporary situations. Thoughtful questions follow each brief chapter in this pocket-sized book. Though many readers have determined that aspects of this work are highly useful in business, some may find that translating military strategy to corporate life is too laborious, or may feel that Sun Tzu focuses their attention on conflict between businesses without addressing production issues or consumer needs. getAbstract thus recommends this immortal title to patient readers and to those interested in strategy in the broadest sense.

General Tao Hanzhang is a senior officer in the People’s Liberation Army of China and a senior advisor at the Beijing Institute for International Strategic Studies.

The Fundamentals of War

War is immensely important to a state. When you fight, the existence of your country is at stake. Your future depends on the results of that conflict. A few core ideas should govern your initial thoughts about whether to go to war or not: First, is your country strong enough to win the war? Appraise the financial support and the strength of spirit required to maintain the country while fighting is underway. If you believe your country is too weak, don’t enter into battle. Second, what are your relationships with your neighbors? If they support you or are neutral, you can risk conflict, but if fighting would unify them against you, don’t take part. Third, is your state internally peaceful? If you already face strife and division at home, don’t risk combat with an external enemy. It will just divide your forces. Don’t fight more than one war at a time, or engage in battle on more than one front. Don’t wage war if your people oppose the conflict.

To understand warfare, master the “five fundamental factors” that determine the outcome of any conflict: