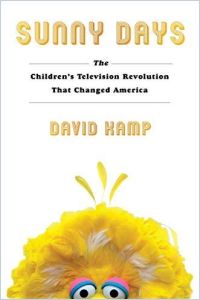 David Kamp’s nostalgic, thought-provoking romp through 1970s kids’ TV programs will remind you that American television once served the public good. Creators such as Joan Ganz Cooney, Jim Henson, Fred Rogers and David McCall channeled their 1970s activism into TV shows that sought to enlighten, entertain, motivate and educate young children. Sesame Street shifted paradigms by emphasizing diversity and exposing inequality. The Electric Company, Zoom, Free to Be…You and Me and Schoolhouse Rock! reflect the era’s exuberance, audacity and belief that children are the future.

Author of The United States of Arugula, David Kamp is a charter member of the Sesame Street audience. His writing has appeared in Vanity Fair, GQ and The New York Times.

In the 1950s and 60s, television transformed America – and not always in good ways.

In 1946, only about 8,000 people in the United States had televisions. By 1961, 47 million people or 90% of all American homes had TVs. Adults watched an average of six hours a day; kids spent more time watching television than they did in school.

Half the schools in the United States didn’t offer kindergarten classes. Middle-class white households had resources to educate kids at home, but Black and Latino kids from poor neighborhoods were falling behind. The nation faced an equity and educational gap.

In 1964 , Lyndon Johnson signed the Elementary and Secondary Education Act, which distributed funds to high-needs districts of low-income families. Combined with advances in cognitive psychology and early-childhood development, the legislation allowed for experimentation in education. Nothing significant appeared until Fred Rogers’ and Joan Ganz Cooney’s pioneering shows, Mr Rogers’ Neighborhood and Sesame Street launched a Big Bang in programming for children, shaping the culture for decades to come.