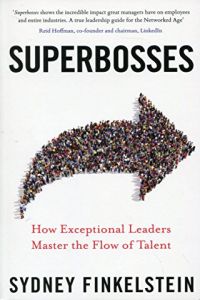 Dartmouth College business professor Sydney Finkelstein asked star performers across many industries, “Who is the best boss you’ve ever worked for?” They described driven, enigmatic, tireless “superbosses.” These leaders populate entire industries with the talented people they nurture. Finkelstein argues that a small number of bosses produce the great majority of the best talent – a sort of 80/20 rule of leadership. He doesn’t portray superbosses as always admirable. You might not like your superboss, and you won’t use the adjective “nice.” But you’ll do anything for that boss, who is someone you’ll never forget and will even come to love – in a way. Finkelstein sets the superboss bar fantastically high, and his investigation will teach leaders at all levels how to become a little more super.

Well-known thought leader, consultant, and executive coach Sydney Finkelstein, PhD, teaches management at the Tuck School of Business at Dartmouth College and is the director of Tuck’s Center for Leadership. His eight previous books include the best-selling Why Smart Executives Fail.

Dartmouth College business professor Sydney Finkelstein – the best-selling author of Why Smart Executives Fail – says “superbosses” hail from every industry and follow no patterns, best practices or rules other than their own. They measure success as much by how many superstars they create as by financial achievements, awards and fame. Their impact doesn’t stop with the leaders and future titans they develop for their own teams and organizations. Finkelstein believes they affect industries for generations. Search across any profession or industry and you’ll find that an extraordinary number of its CEOs and superstars trace back to one person for whom they all worked at some point during their career.

As an example, Finkelstein points to Jon Stewart and The Daily Show. The entertainment industry stars who’ve sprung from its proving grounds – including Stephen Colbert, Steve Carell, John Oliver, Rob Corddry and Ed Helms – attest to Stewart’s bona fides as a superboss. Or take Michael Miles, for example, the legendary former CEO of Kraft Foods, whose protégés include the CEOs of Nabisco, Campbell Soup, Mattel, Young & Rubicam, Gillette, and more.

4 Ways Managers Can Be More Inclusive
8