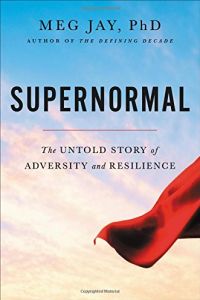 Clinical psychologist Meg Jay offers her analysis on “resilient people” – adults who triumphed over childhood adversity to achieve great success. Traditionally, society and psychologists thought resilient people somehow brushed aside adversity to emerge unscathed from the traumas of bullying, sexual abuse, bereavement or absent parents. In reality, Jay argues, resilient children, once they’ve grown up, feel as vulnerable to danger and uncertainty as anyone. But they are more prepared to deal with it since they’ve already learned and developed coping strategies. Such skills pay dividends later on in life, laying a path for achievement. But a lifetime of living with the stress of constantly having to cope leaves many of these adults feeling fragile. Jay writes compassionately and vividly about the difficulties resilient people experience in adjusting to the “normal” world. Managers, coaches and teachers who deal with exceptional performers and anyone seeking a balance between past trauma and present accomplishment will appreciate Jay’s innovative handbook.

Researchers believe childhood adversity is a crucial factor in about half of all mental illnesses. They’ve expended a lot of research energy trying to figure out why some children seem impervious to the negative effects of adversity. Such kids somehow emerge from early years of trauma, neglect, abuse and tragedy to grow into accomplished, seemingly well-adapted adults. The psychological term for such people is “resilient.” They are leaders, innovators and virtuosos in medicine, art, business, sports, education, science, and other fields. Their numbers include such celebrities as tennis great Andre Agassi, media mogul and philanthropist Oprah Winfrey and Starbucks chairman Howard Schultz.

When psychologists began studying resilient children in the 1970s, they suspected these children possessed some mysterious quality, a kind of superpower that enabled them to become invulnerable to the negative forces in their lives.

But these kids aren’t invulnerable, and they don’t have superpowers. To shield their vulnerabilities, they devise strategies for coping with unpredictable or dangerous environments. Some of these strategies ...