Summary of Sweet and Low 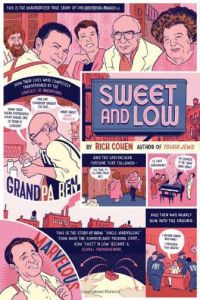 This very unusual, literary corporate biography is written from a unique vantage point: Author Rich Cohen’s family members are the protagonists. The corporate owners and inventors of Sweet’N Low are his grandparents, uncles, aunts and cousins. The other driving force here is the story itself, a thick syrup of invention, feuding, a loving family, criminal graft, federal investigation, Brooklyn, America’s obsession with dieting and an immigrant saga. Since this is also the history of Cohen’s relatives, he has unique insights into the motivations, emotions and feelings behind the corporate decisions that shaped how a fortune was made, disputed and distributed. The story, which flows loosely between time periods and subjects, is an excellent corporate biography, particularly when it covers the dangers of running a family business. The story has all the cinematic elements of a dark comedy. getAbstract recommends it to business and recreational readers for its interesting journalistic storytelling, and its insightful presentation of the family and corporate dynamics hidden inside that familiar little pink packet.

Rich Cohen is the author of Tough Jews, The Avengers, The Record Men and the memoir Lake Effect. His work has appeared in the New Yorker and Vanity Fair, and he is a contributing editor to Rolling Stone.

America’s obsession with dieting began in Brooklyn. That may seem like an odd place, but both diet cola and the popular sugar substitute, Sweet’N Low, were invented in this New York City borough. Brooklyn became the locus of these industries because of its entrepreneurial spirit and because, in the 1940s, it processed 40% of the world’s sugar. Plentiful meals and European eating habits helped fuel the local need to diet. The quest for slenderness was the reason that the bathroom scale also was invented in Brooklyn.

Benjamin Eisenstadt was born in New York in 1906, the son of Polish immigrants. Ben’s father worked on the docks until he died at age 32. His mother was unable to raise her three children alone, so Ben went to live with relatives in New Jersey. His family’s economic situation deteriorated, and soon Ben’s mother and siblings moved to California, leaving Ben to fend for himself in New York. In 1927, he entered law school and finished at the top of his class. Then the Depression halted the economy and Ben could not find clients. In 1931, he married Betty Gellman, a New York University English literature student with a driven personality...