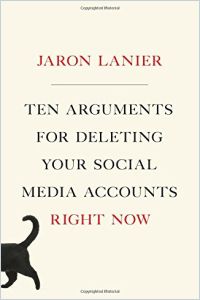 A virtual-reality pioneer, Lanier recognizes that social media companies assert that they have a noble mission and worthy purpose: to help people connect. But their methods, tactics and practices, he cautions, generate many sinister side effects. To optimize their advertising-based revenue model, he argues, Facebook and other social platforms conduct perpetual mass surveillance of their users in order to compile gigantic amounts of data about their preferences, activities and relationships. Advertisers pay these companies to mine and exploit their user data. The result, according to Lanier, is a heretofore unseen universe of marketing tantamount to a mass “behavior-modification” program.

Lanier finds that darker forces, like hate groups and hostile foreign powers, have surreptitiously exploited the networks’ data-driven algorithms to spread propaganda and disinformation. Legal regulations and industry self-policing haven’t worked in the past and aren’t likely to ameliorate social media’s dangers in the future. They refuse to address the central, underlying problem that Lanier identifies: the data-centered profit model. The best and maybe only road to reform, he asserts strongly, is for users to delete their accounts to force companies to change their policies.