Summary of The 10 Rules of Sam Walton 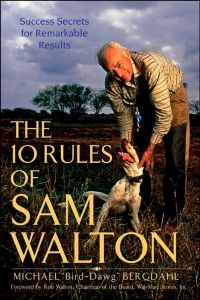 This book is clearly an endearing, uncritical testimonial about Sam Walton, founder of Wal-Mart. Author Michael Bergdahl, a former employee, has written two books on Walton and Wal-Mart. He was a favorite of Sam Walton, who gave him the nickname "Bird Dawg," because Bergdahl drove a pickup truck. Walton was an avid hunter who also had an old truck and owned several bird dogs – appropriately the book's cover shows him patting one. S. Robson Walton, Sam Walton's son and the chairman of the board of Wal-Mart, wrote the foreword, and the author remains close to the Walton family. Thus, it is not a surprise that this content-approved book is effusive in its praise for Walton. Still, the advice is solid, and getAbstract suggests it to anyone who enjoys learning about successful companies and their leaders.

Michael Bergdahl worked with Sam Walton as Wal-Mart’s director of the Home Office People Division. He worked with other retailers, and is now a full-time speaker and business coach. He also wrote What I Learned from Sam Walton: How to Compete and Thrive in a Wal-Mart World.

Sam Walton was a self-made man who founded Wal-Mart, Sam’s Club and Wal-Mart Supercenters. In the process, he also became the most successful entrepreneur in world history. Walton, known to his co-workers as "Mr. Sam," was approachable and personable. He constantly studied his competitors and suppliers. He wanted to know what made other companies great, so he could apply that knowledge to his own business.

Walton was a hard worker who regularly held staff meetings on Saturdays. He challenged himself and others to reach higher goals. He questioned the conventional way of doing things and invented new methods for improving business processes. He was afraid to fail, so he pushed himself even harder. He relied on the Golden Rule, especially in the workplace. He put his customers first and treated his employees as equals. He seemed to want to be known in the business world as "an uncommon common man."

Walton held a bachelor's degree in economics from the University of Missouri at Columbia and served as a captain in the U.S. Army Intelligence Corps. He gained his early retail experience working at J.C. Penney, where he met that company’s founder, James...