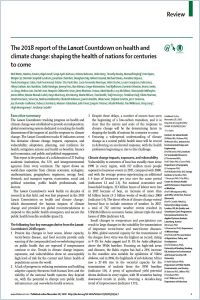 The public discussion of global warming often focuses on financial costs and property damage; the toll on human health gets lost in the debate. In this report from the British scholarly journal The Lancet, dozens of experts explore the numerous menaces climate change poses to human well-being, from more cases of malaria and dengue fever to more deaths caused by extreme weather. The experts also fear a rise in other effects, less likely to grab headlines but still troubling: more heat stroke, more food insecurity, more deaths from air pollution, more mental illness. The report’s style is formal and turgid, although that’s not necessarily a bad thing. With such prominent figures as U.S. president Donald Trump decrying climate change as fake news, perhaps less emotionally charged language is in order. The authors make a clear and compelling case for why global warming is indeed “the biggest global health threat of the 21st century.”

The Lancet Countdown on Health and Climate Change report was produced by 150 experts from 27 universities and institutions, including the World Health Organization and the World Bank.

An Overlooked Consequence of Climate Change

Much of the discussion of climate change focuses on ecological and economic impacts; the effects on human health often get overlooked. The fact remains that a warming planet, with more extreme weather, poses a grave threat to public health – one that is steadily increasing. From 1990 to 2017, for example, the number of people exposed to heat waves increased by 157 million, and intense heat claimed 153 billion hours of labor in 2017 alone. Even small shifts in temperature and rainfall can result in more people contracting serious diseases such as malaria. The Baltics saw a 24% increase in coastline area suitable for the incubation of the Vibrio cholerae bacterium, while sub-Saharan Africa’s highlands have experienced a nearly 28% increase in mosquito-borne malaria capacity since 1950.

Climate change has also hurt agricultural output. After rising for decades, farm yields are falling across the globe – a reality that could squeeze food reserves. Extreme weather affects supplies of potable water, and heat waves can harm livestock. Global warming’s impact on agriculture...

How the Geography of Climate Damage Could Make the Politics Less Polarizing
9
Can We Have Prosperity Without Growth?
8
Stakeholder Capitalism
8
Good Economics for Hard Times
8 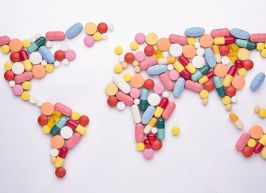