Summary of The 3rd Alternative 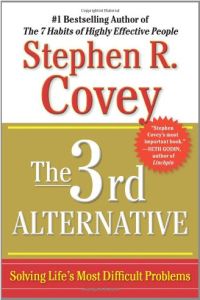 With more than 25 million copies of his books sold in 38 languages, Stephen R. Covey is one of the world’s most popular authors. This book is an effort to fulfill one of his most ambitious goals: provide a method his readers can use to resolve all their interpersonal problems, no matter how difficult. Covey explains to readers that his “3rd alternative” tactic “may be the greatest discovery of their lives.” His basic idea is that everyone deserves respect, including people with whom you disagree vehemently. He urges you to try to regard an opponent with this thought: “If a person of your intelligence and competence and commitment disagrees with me, then there must be something to your disagreement that I don’t understand, and I need to understand it.” This may not always be practical. Some people don’t want a meeting of the minds. Still, Covey has been right before, and getAbstract welcomes his suggestion of a better way to find agreement.

Stephen R. Covey is the author of The 7 Habits of Highly Effective People and other best-selling books that have sold more than 25 million copies in 38 languages.

A World of Problems

Problems are everywhere – in relationships, in the family, at work, in local and national government, and in discourse among nations. Most people have no workable solutions to their conflicts and problems. Many folks resign themselves to soldiering on wearily, their fingers crossed, hoping against hope. Clearly, this is not an efficient way to solve anything.

Of all the habits discussed in Covey’s best-selling The 7 Habits of Highly Effective People, his “3rd alternative” tactic may be “the most empowering, the most unifying and the most exciting.” It is founded on the idea, “Until we understand people’s hearts, not just their minds and ideologies, nothing can happen.” This principle offers a tactic for overcoming difficulties, but it isn’t easy to practice. Solving thorny problems requires “radically” changing how you think. The third alternative depends on the participants’ ability to adopt a more open frame of mind.

Three Alternatives Are Better Than Two

The third alternative contrasts with the familiar “2-alternative” approach in which people line up on one side or the other in passionate opposition: “liberals...