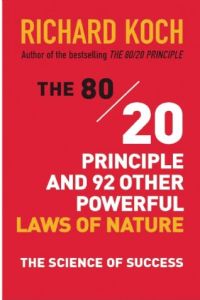 While they were unlocking the secrets of the universe, scientists like Isaac Newton and Albert Einstein also discovered principles that are relevant to business, says entrepreneur Richard Koch. In this wide-ranging, dense but well-organized survey of science and commerce, he draws management lessons using 93 “power laws” (the familiar 80/20 principle and 92 more) from biology, evolutionary psychology, physics, game theory and chaos theory. Disappointingly, some lessons prove to be mere analogies: A subatomic particle can be in two places at once, so you should adopt a “both-and” approach to decision-making. And Koch’s theory descriptions can be too cryptic. But in the extensive sections on competition and nonlinear systems, his advice is specific and utilitarian, and the parallels with science are direct and illuminating. As a bonus, Koch provides a quick refresher on the history of science over the last 300 years, and his crisp layout and lists add clarity. getAbstract recommends his insights and methods to business students, managers and entrepreneurs seeking a fresh perspective on strategy.

Richard Koch is an investor and bestselling author. He worked as a consultant at The Boston Consulting Group and Bain & Company, and co-founded The LEK Partnership, a strategy consultancy.

The “Power Laws” of Science and Business

Science reveals that a limited number of power laws underlie all phenomena. Isaac Newton discovered many of the most familiar of these principles in the 1600s, including the laws that govern motion and gravity. He described the universe as a giant “clockwork,” a vast machine whose components operate in precise, predictable ways. Newton’s became the dominant model of the universe for the subsequent 200 years and sparked an epoch of technological progress that stretched from the steam engine to flight.

Modern science has discovered that there is more to the story. The power laws of relativity, quantum mechanics, and the nonlinear sciences of chaos and complexity are strange and counterintuitive. They describe a cosmos in which time is elastic, space is warped, and light is simultaneously a wave and a particle. Newton’s predictability once ruled all behaviors; now Werner Heisenberg’s “uncertainty principle” dominates.

Science’s power laws explain as much about business as they do about the natural world. Newton influenced business profoundly and not only in technology and engineering. His notions pervaded classic economics...