Summary of The Age of Surveillance Capitalism 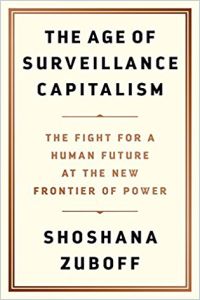 Harvard professor emerita Shoshana Zuboff discusses the growth, prevalence and ramifications of “surveillance capitalism” through the lenses of business and the economy, privacy and ethics, politics and law, as well as the intersections of these systems. She provides a well-researched, harrowing tale of contemporary and future business practices. While Zuboff cautions you to protect your privacy and human rights, she provides scant guidance on how to do so, unfortunately. Nevertheless, Zuboff’s reportage matters to anyone interested in e-commerce and privacy rights, and to Google or Facebook users – in other words, to everyone.

Surveillance capitalism isn’t technology but a logic that drives technology, commanding its actions.

Today, technological progress has created new fields of peril and of invasions of privacy. The emerging information civilization poses the question, “Can the digital future be our home?”

Engineers and computer scientists developed the idea of the “aware home” back in 2002 to study the concept of ubiquitous computing. Networked sensors placed in wearable computers captured information.Today, the Nest thermostat – developed by Google’s holding company, Alphabet – monitors and learns the behaviors of a home’s inhabitants. It can collect data from connected devices, including beds, ovens, cars and fitness trackers.

These networked, Wi-Fi-enabled devices store vast amounts of personal data. That data creates power. Determining who controls that power is a defining feature of surveillance capitalism. A smart device’s user must agree to complex privacy policies, terms of service and licensing agreements which, merely for the network of connected devices and apps that support Nest, require the thermostat...

The Secrets of Surveillance Capitalism
8