Summary of The Age of Turbulence 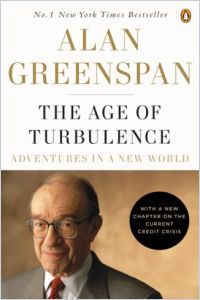 In the wake of the 2008 global financial crisis, it’s easy to forget that former US Federal Reserve chairman Alan Greenspan presided over a tumultuous economic period that was both “irrationally exuberant” (these are his own words) and painfully transformative. His autobiography predates the crisis – even the later edition’s 2008 epilogue precedes the Lehman Brothers bankruptcy – so any current reader will likely view Greenspan’s career through that crystal. Yet his thorough, expansive history of US politics and economics from the end of World War II to the turn of the 21st century, including his private thoughts on working with six US presidents, is a compelling illumination of how the nation evolved. His command of economic history, facts and figures is impressive, but he is much more than a numbers nerd: He grew up a fatherless only child, once made a living playing saxophone in jazz bands and married a famous television journalist, none of which kept him from being at one time “the second-most powerful man in the world” and its “most powerful banker.” While the book’s first half engagingly reveals Greenspan’s personal journey, the second half – his meditations on global issues – bogs down in plodding econospeak. Nonetheless, getAbstract warmly recommends this instructive personal and national saga to those interested in economic history and contemporary issues.

Alan Greenspan served as chairman of the Federal Reserve Board from 1987 to 2006. He now heads Greenspan Associates, an economic consulting firm.

Alan Greenspan was born in 1926 in Manhattan, where his divorced mother raised him amid her large, lower-middle-class Jewish family. As a boy, he delighted in memorizing baseball statistics, train schedules and telegraph codes. Scouring the beaches of Queens for coins during the Depression led to his lifelong habit of walking with his eyes cast down. His absent father appeared in his life only sporadically.

Greenspan was a middling student, though he excelled in mathematics. He developed a love for music in his youth, diligently practicing first the clarinet and then the tenor saxophone. He never intended to go to college; in 1943, he fully expected the armed services to draft him, but a medical discharge precluded military service. He made a living as a musician, touring the US with big-band orchestras and jazz groups. He eventually attended Juilliard, where he studied piano and composition and played saxophone alongside his classmate, Stan Getz.

Greenspan read business books in his spare time and prepared his fellow musician’s income taxes. Finding that his passion for numbers never left him, he enrolled in New York University in 1945 to pursue...