Summary of The Age of Zombie Democracies 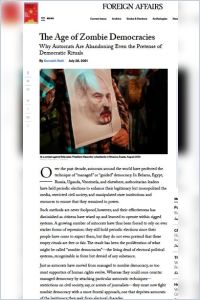 While some autocrats make plain their dictatorial rule, many others run “zombie democracies,” as author Kenneth Roth describes those governments that are democratic in name only. His informative article dissects the autocrat’s playbook – limit the media, game the judicial system, and buy off military and business elites – and the way it gives the appearance of democracy. Roth places the onus on true democracies to expose the impostors.

Kenneth Roth is an attorney and the executive director of Human Rights Watch.

Many autocrats hold elections, but they manipulate the process.

Tyrants in numerous nations seem to have refined the practice of feigning democracy by holding elections from time to time. Elections give an impression of democratic rule, but free and fair elections are an illusion when leaders manipulate the process. Autocrats make these efforts to burnish their reputations, all while controlling crucial institutions and the media.

Old-school despots rule by diktat: The Chinese Communist Party and its opposite numbers in North Korea, Cuba and the post-Soviet regimes of Central Asia are unapologetically repressive. But a number of countries, like Egypt, ...

How Hong Kong Got To This Point
8