Summary of The Agility Shift 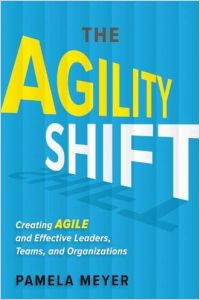 Traditional organizations – those that plan for expected events, rely on formal performance reviews, and require authorizations and sign-offs before making decisions – face increasing risk. Today’s business universe is complex, ambiguous and volatile. Survival requires fast, effective responses. The agility that business consultant and instructor Pamela Meyer advocates can help companies respond to sudden change and challenges with speed and confidence. Agility turns threats into opportunities. Meyer describes how leading organizations thrive in an unpredictable world by developing agile individuals, agile teams and a flexible culture. getAbstract recommends her manual as a leader’s guide to cultural transformation, a career tool for employees and a manual for learning professionals – must reading for CEOs, HR managers, start-ups and small business owners.

Pamela Meyer writes, teaches and consults in the field of agility and innovation.

On January 15, 2009, Captain Chesley Sullenberger was at the helm of a jet that suddenly lost altitude over New York City. Geese flew into both engines, rendering them useless. During his military career, Sullenberger’s study of accidents that killed many of his friends showed him that delayed decisions cost lives. He quickly decided that landing on the Hudson River offered the best chance of survival for the 155 people aboard his plane. Sullenberger demonstrated exemplary agility in the face of a sudden, unexpected event.

Although the world of business and work doesn’t require you to land planes on the Hudson, it is increasingly volatile and uncertain. Today, planning and analysis aren’t enough in a crisis. You must develop the ability to respond effectively to the unexpected. You and your organization must be agile.

Agile organizations financially outperform those that are not. The softer benefits of agility include productive, engaged workers who stay with your firm longer and enjoy their work. Agility is not planning. Plans survive only until reality intrudes. Accepting that you can’t predict the future or control...