Summary of The Allure of Toxic Leaders 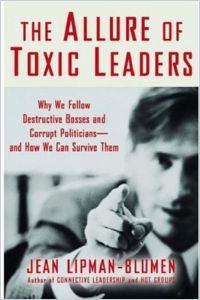 This intriguing, intellectual study of disastrous leadership offers a courageous interpretation of corporate scandal and political folly. Amoral leaders are not entirely to blame, Jean Lipman-Blumen argues. Rather, followers enable misguided leaders to rise to power and stay there. Her analysis applies psychological principles to Adolf Hitler’s Germany and Jeff Skilling’s Enron (not exactly parallel, but you get the idea) and concludes that toxic leaders’ followers are willing victims who allowed misguided bosses to appeal to their basest instincts. While Lipman-Blumen’s assertions are startling, she makes a compelling case written in dense but readable prose with intriguing detail. getAbstract.com suggests this book to anyone seeking a deeper understanding of the relationship between leaders and their followers, particularly given the swath cut by today’s toxic leaders.

Jean Lipman-Blumen is a professor of public policy and organizational behavior at Claremont Graduate University in California. She is a co-founding director of the Institute for Advanced Studies and served as a special adviser to President Jimmy Carter. Her previous books include The Competitive Edge and Hot Groups.

What Makes Destructive Leaders So Strong?

From Adolf Hitler to Enron’s Jeff Skilling, from China’s Chairman Mao to Sunbeam’s Al Dunlap, the history of politics and enterprise is filled with toxic leaders. These destructive, power-hungry people make poor decisions meant to aggrandize themselves and demean others. They seek to control those around them, who gladly give the boss credit, accept some for themselves and resolutely deny blame. Toxic leaders enjoy moments of glory but finally fail, leaving their organizations in tatters and solidifying their ignominious places in history.

Recent decades have seen a plethora of these ruthless, skilled bosses, in part because wallflowers, do-gooders and saints rarely seek positions of political or corporate leadership. After all, such traits as humility and selflessness are of little help as one climbs the corporate ladder. By their very nature, and often to the betterment of their performance, leaders are driven and competitive, charismatic and self-confident, smart and cunning. But those characteristics also can push a leader’s behavior into the realm of toxicity.

The corporate scandals of the past few years offer a ...