Summary of The Art of Connection 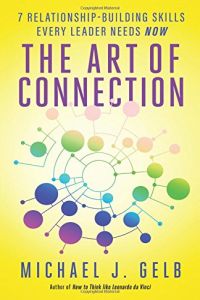 Leadership expert Michael J. Gelb explains that many great businesses base their success on face-to-face communication. The leaders of these companies depend on seven personal relationship skills, such as practicing humility and becoming a better listener, to increase the scope and the depth of their organizations. Gelb presents a compelling case that learning these skills can help you connect more profoundly with other people and with yourself. His supporting testimony from noted authorities becomes a little overwhelming, but his motives are clearly supportive. getAbstract recommends Gelb’s advice to everyone seeking to build better relationships, especially those in customer-facing jobs or in human relations.

Michael J. Gelb co-directs the Leading Innovation Seminar at the University of Virginia’s Darden Graduate School of Business and is on the faculty of the Institute for Management Studies.

Sam Horn has written best-selling books, has trained some of the world’s leading businesspeople and has earned acclaim as a specialist in communication. Growing up as a bright child in a small town, she didn’t realize that her intellectual pursuits tended to isolate her. She didn’t like idle chatter, and she wasn’t aware she often projected a boastful attitude.

Then Horn stumbled onto How to Win Friends and Influence People, Dale Carnegie’s popular self-help book. The book transformed her life. She realized she needed to move beyond her reputation as someone who was intriguing and, instead, become the most curious person in the room. Instead of displaying her knowledge, she now sets out to probe other people’s insights. As a result, Horn is usually the most sought-after person anywhere she visits. Her popularity results from her perennial effort to improve her abilities to build relationships. As she sees it, “connection is the secret of life!”

A team leader climbs up a tall tree in a forest. He looks down and shouts that the lumber ...