Summary of The Ascent of Media 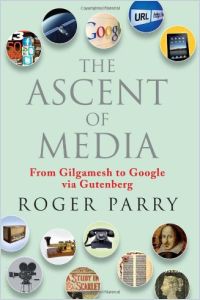 Media entrepreneur Roger Parry has written a worthwhile book that clarifies how early media forms influence the latest digital media, which shape your daily life and society’s perceptions of the world. Parry’s fascinating history helps you understand how the media affect your thinking and emotions. getAbstract warmly recommends this history of media to anyone who has read a book, watched a movie, listened to music, talked on the phone, attended a play or surfed the web. It contains hundreds of interesting, little-known details about every aspect of the media universe.

For early humans, the communication of content – media’s essential purpose – was a direct activity. Unless you were close enough to hear someone speak or play music or to be able to see a painting, you learned nothing. Later, mediation via writing enabled communication of information and other content. Today, the Internet communicates content instantly worldwide.

The Oxford English Dictionary defines “media” as “the main means of mass communication (esp. newspapers and broadcasting).” As such, media convey four core types of communication: “speech, music, images and writing.” Humankind may first have used sound, the basis of speech, to communicate some 350,000 years ago. Researcher Dr. Quentin Atkinson suggests that all “504 currently recognized major languages” trace back to humans who lived some 50,000 years ago in sub-Saharan Africa. Speech predates writing by millennia. Music also preceded writing and likely influenced speech. The oldest musical instruments were vulture-bone flutes made in what is now Germany about 35,000 years ago. In terms of images, early cave drawings of animals are roughly 30,000 years old.