Summary of The Bias Detective 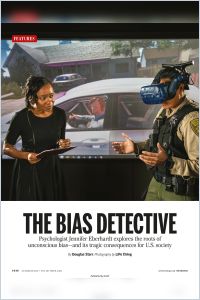 She is taking this world that Black people have always known about and translating it into the principles and building blocks of universal human psychology.” (Phillip Atiba Goff, Center for Policing Equity, John Jay College of Criminal Justice)

Eberhardt thinks that face recognition is honed through experience, rather than based on genetics. She believes people observe the facial distinctions of those who surround them in their formative years, and this shapes their reactions during tense confrontations, such as police encounters. Her experiments show that a subconscious link between criminals and Black faces can remain, even when subjects are given time to think about it.

In one study, subjects were asked to rate photos of criminal defendants as more or less stereotypically Black. Those who were thought to look more “Black” were more likely, in reality, to have received a death sentence. In a 2016 experiment, Eberhardt found that people associated pictures of Black families with “bad neighborhoods.” Another study showed that teachers tended to assign Black children “patterns of bad behavior” worthy of discipline.

As a descendant of slaves, Eberhardt’s main impetus is to use science to drain racial bias of its power and mystery.

As a scientist, I made it my role not to just be a member of a group who could be targeted by bias but to do something about it. To investigate, understand it, and communicate with others.” (Jennifer Eberhardt)

One study examined the long-debunked belief that Black people represent an evolutionary link between apes and white people, which resurfaced after the 1991 Rodney King race riots. Eberhardt showed students images of white or Black faces, followed by animal images, including apes. She found that those who first saw Black faces identified apes more quickly. In a subsequent study, a largely white group of students who saw images of apes followed by video of police brutalizing a Black man more often thought the beating was “deserved.”

Eberhardt has explored sensitive areas of race relations, such as bias within police departments.

Eberhardt, who has a PhD in cognitive psychology from Harvard University, played a pivotal role in efforts to reform the troubled Oakland, California police department. Attorney Jim Chanin, whose lawsuit provoked a court-ordered reorganization program, says Eberhardt’s efforts have brought about positive changes.

The department’s scandalous record for police brutality has triggered numerous lawsuits. The 2014 decision required the department to perform 51 reformation tasks. Focusing on a single year’s 28,000 traffic stops, Eberhardt collected data including why each stop occurred, the driver’s race and whether the driver was arrested.

Eberhardt found that while 28% of the city’s population is Black, 60% of those stopped were Black. Black drivers were also handcuffed and searched three times more often than white drivers, and were stopped more often for minor violations.

Before these results, our officers would have told you that close to 90% of those stops were based on intelligence. The data said it was actually under 5%.” (LeRonne Armstrong, Oakland deputy police chief)

An extensive review of body-camera footage revealed a disturbing pattern in the manner in which police talked to Black individuals versus white drivers. Because these interactions were similar whether the cop was Black or white, Eberhardt thinks some bias may be engendered through police training. Eberhardt’s group trained Oakland police with role-playing and virtual reality, and to ignore minor violations. The number of Black drivers stopped was cut almost in half between 2016 and 2018.

Unconscious bias can be overcome with training and determined practice.

There’s no easy antidote for unconscious bias. The legacy of past policies, such as segregated neighborhoods and mass incarceration, creates conditions that trickle down to individual brains.”

Oakland police officers now routinely call for backup, set up a perimeter and devise a plan before moving in on a suspect. This kind of reasoned response or mental “friction” caused a significant drop in the number of shootings and officer injuries. Eberhardt thinks everyone could employ self-interrogation and self-awareness practices in their personal lives to reduce bias.

Discrimination
Educate Yourself: Biases and Prejudices