Review of The Big Stick 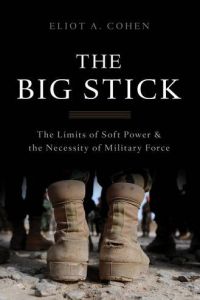 America’s military misadventures in recent years have done little to change Eliot A. Cohen’s worldview. This former adviser to President George W. Bush believes American military might is a tool the United States must use against dark forces.  Cohen’s nuanced view of the Bush wars makes it difficult to dismiss his tough talk as the work of an apologist for America’s foray into the Muslim world. Cohen makes a compelling, well-reasoned argument that the world is a dangerous place and that United States’ power, while not always deployed perfectly, remains critical to keeping the peace. President Donald Trump’s repeated vow to “knock the hell out of ISIS” conforms with Cohen’s big-stick strategy, though he offers withering criticism of Trump’s character. Cohen’s aggressive if pragmatic view of US military power will appeal to anyone interested in policy or the intersection of civil and military strategy.

Eliot Cohen, a professor of strategic studies at Johns Hopkins University, spent the last two years of George W. Bush’s presidency as a counselor of the Department of State.

Speak Softly and Arm the Troops

Elliot C. Cohen, a former advisor to President George W. Bush quotes Teddy Roosevelt’s  military philosophy: “Speak softly and carry a big stick – you will go far.” The big-stick philosophy holds that if a nation’s military might is sufficiently imposing, it never needs to resort to force. Decades into the United States’ tenure as “guarantor of world order,” many Americans question the wisdom of paying for being the world’s policeman.

Today, Elliot notes,  America is globe’s greatest force. “The bottom line here is simple,” he writes, “despite all the disappointments and losses of recent years, America is immensely strong, across many dimensions of power.” In 1908, the US armed forces had 128,000 men in uniform; now it has 1.3 million troops on active duty. Cohen cites  a variety of challenges, including the rise of China, the recalcitrance of North Korea, and the stubbornness and  violence of Islamic jihadies.