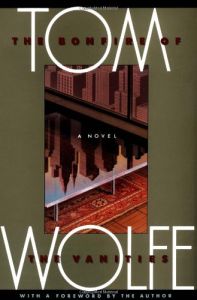 Book The Bonfire of the Vanities

Tom Wolfe, an eloquent, if sometimes pessimistic, writer who deeply understands modern culture, wrote this massive, classic tale of greed, ambition and power. He casts the story of financier Sherman McCoy in the financial world of Wall Street, but includes the racial, political and economic issues of New York City in the early 1980s. Even 13 years after its publication date, this is still a gripping read. You can use this book as the starting point for reading about business culture from a fictionalized perspective. Or, you can combine it with Michael Lewis’ Liar’s Poker and The New New Thing, for insight from fact and fiction into the major episodes of greed and economic boom in the past 20 years. This undeclared trilogy examines the desire - not confined to Americans, though the books are U.S.-based - to achieve wealth at any cost. getAbstract recommends this book, all by itself, as a seminal volume in business fiction.

Master of the Universe

"I am a Master of the Universe!" Sherman McCoy thought after he completed a trade that netted him $50,000. Little did it matter that the bond salesman borrowed the term from his daughter’s doll set, a rather vulgar set of plastic dolls with the names Dracon, Ahor, Mangelred and Blutong. When Sherman McCoy made the trade, an order for zero-coupon bonds, he knew that the term described him. When it came to making money in the financial markets, he was the best; he was a Master of the Universe.

Even though he was a Yale graduate and a million-dollar bond salesman, when he got home, Sherman still had to take the dog for a walk. He could get his wife to walk the dog, but he had an ulterior motive; he needed go out to use a pay phone. The Master of the Universe wanted to call his girlfriend, Maria, without his wife overhearing.

As Sherman struggled to place a leash on Marshall, he looked up at Judy and thought, my wife looks good for a woman of forty. He marveled at her "fine thin features, her big blue eyes, her rich brown hair." Then he had a change of heart; "She’s 40 years old! No getting around it. Today good-looking... Tomorrow they’ll ...

Tom Wolfe  , a reporter and novelist, is the author of a dozen books, among them such contemporary classics as the Electric Kool-Aid Acid Test, The Right Stuff and A Man in Full.