Summary of The Bottomless Well 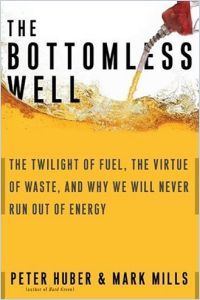 Most books on energy proceed with all the plodding predictability of an oil station pumping up and down in the middle of Nowhere, Texas: There’s only so much oil, it’s being consumed faster and faster, so someday the spigot must squeak dry. Authors and contrarians Peter W. Huber and Mark P. Mills stand up in the court of global opinion to pound loudly on the oil drum of iconoclasm. The question before the world jury: Is this a work of genius, or a perfect illustration of the fact that some energy is indeed wasted? This book reflects diligent-if-tendentious research and unapologetically advances highly unpopular, and potentially inaccurate, theories. These include the notion that making industrial processes more energy efficient results in increased consumption. It asserts that energy development is a perpetual motion machine that rewards increased consumption with ever-expanding supplies, and that wasting energy is both inevitable and virtuous, as it leads ultimately to greater supply and production. This last notion is not so far-fetched in light of nuclear fusion and the ongoing convergence of digital and genetic technologies. getAbstract.com recommends this unique perspective to those interested in a different take on the world’s sustainability dilemma. If nothing else, it will give you something extremely controversial to read while the jury is still out.

Peter W. Huber specializes in the study of technology, science and law at the Manhattan Institute’s Center for Legal Policy. His previous books include Hard Green and Galileo’s Revenge. Physicist Mark P. Mills is a founding partner of Digital Power Capital. He holds several patents in integrated circuits and defense electronics, and served a stint as staff consultant to the White House Science Office during the Reagan Administration.

The year: 1979. The economy is still recovering from the turmoil of the OPEC oil crisis, followed by the uranium core meltdown at Three Mile Island in Harrisburg, Pennsylvania, which gripped the nation in terror and angst. As a result of the Three Mile Island accident, the U.S. government’s issuance of permits for new nuclear reactors came to a screeching halt.

"The energy future is bleak," pronounced (former) Secretary of Defense James R. Schlesinger. "And it is likely to grow bleaker in the decade ahead. We must rapidly adjust our economics to a condition of chronic stringency in traditional energy supplies."

Looking back, it is now clear that the U.S. responded to the situation by creating a policy that caused the use of an additional 400 million tons of coal a year. This increase in consumption occurred even as the efficiency of appliances, air conditioners, refrigerators and light bulbs grew 30% to 50%. Today, the demand for more power continues to rise, and the U.S. continues to maximize productivity at the cost of increased consumption.

Most people don’t understand energy. Those who insist the energy supply...

Inconspicuous Consumption
9
The New North
9
The Russian State and Russian Energy Companies, 1992–2018
8
Physics of the Future
9
Midnight in Chernobyl
9
The Unnatural World
9