Summary of The Care and Feeding of Bots 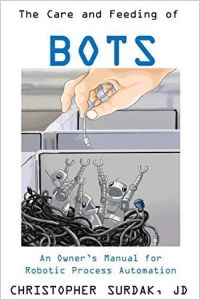 Tech specialist Christopher Surdak explains robotic process automation (RPA) from an investment and a functional perspective. Bots already exist – a macro in Excel is a bot – but RPA systemically optimizes bots to replace human labor. Like much in the tech world, scale proves crucial to successful RPA deployment. With proper deployment and maintenance, bots will be the world’s new labor force, handling mundane tasks so humans can be more human.

Companies may regard robotic process automation (RPA) as a quick fix for certain processes, but to deliver a reasonable return on investment, RPA must scale. To understand how, executives should understand what a bot is and what it can – and can’t – do, and change their thinking about capital investment in IT. Existing at the low-end of the intelligent automation (IA) spectrum, RPA applies existing technology in a new way.

A bot is a small software program that automates a mundane, repetitive task.  A bot runs macros in Excel, for example, or auto-fills forms. These functions have existed for years, but they lack cohesion; they mimic human interactions with software, only faster and more efficiently, with fewer mistakes. However, they require sound design, responsible deployment and regular care. When a bot doesn’t work properly, catastrophe may result.

Millions of bots do small tasks, everywhere. RPA harnesses these programs and centralizes them for efficiency and clarity.

RPA may lack the charisma of big data or digital transformation, but ...

The Cybersecurity Playbook
8
The Rules of Contagion
7