Summary of The Checklist Manifesto 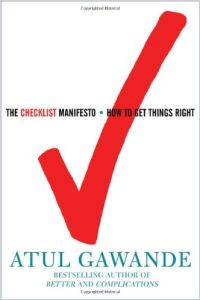 Some of the most highly trained and respected professionals in the world rely on the humble checklist to keep them organized and out of trouble. Tremendous advances in scientific knowledge now overwhelm practitioners in many fields – to the point that they make regular but frequently avoidable mistakes. Boston-based surgeon Atul Gawande chronicles how his research into the aviation, construction and investment industries helped shape the World Health Organization’s production of a two-minute, 19-point surgical checklist that has saved countless lives worldwide. While not designed to be a how-to manual, Gawande’s book provides sample checklists, instructive examples and plenty of food for thought about how to create and fine-tune checklists that fit your job and your organization’s mission. getAbstract prescribes this eye-opening report to anyone responsible for complex tasks or for the lives of others and particularly to readers who plan to check into a hospital anytime soon.

Atul Gawande is a MacArthur Fellow, a surgeon at Brigham and Women’s Hospital in Boston, and an associate professor at Harvard Medical School.

“The Problem of Extreme Complexity”

Humans like to think of themselves as being in complete control of their world, but, more often than not, they must deal with failure. Such defeats stem, in part, from what philosophers Samuel Gorovitz and Alasdair MacIntyre call “necessary fallibility”; that is, despite scientific advances, some efforts people pursue are “simply beyond” human capacity. In areas of great achievement, such as erecting skyscrapers, predicting violent weather and performing lifesaving surgery, even experts must humbly concede the limitations of advanced training and years of experience.

Error-based failure happens for two reasons: “ignorance and ineptitude.” Ignorance stems from the fact that people still have a lot to learn about the world and how it works. Ineptitude occurs when knowledge exists but people don’t apply it correctly. For example, in medicine, research has illuminated staggering amounts of knowledge about human health, so much so that ineptitude is now as great a problem as ignorance. Furthermore, sometimes the problem is “‘eptitude’ – making sure [to] apply the knowledge...consistently and correctly.”

Despite advances in technology...

How Innovation Works
9
Taking Minutes of Meetings
8
I Don’t Agree
8
Turn Enemies into Allies
9
Fair Leadership
8
Coach the Person, Not the Problem
8