Summary of The Chief 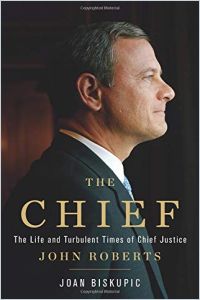 Chief Justice John Roberts has always played his cards close to his chest. Though he may seem like a loyal Republican, he has deviated sharply from orthodox conservative thinking at times, and he insists upon the neutrality of the Supreme Court. In this book, longtime Supreme Court legal analyst and reporter Joan Biskupic attempts to answer the question: Who is John Roberts, and what makes him tick? This insightful book provides an approachable overview not only of Roberts’s biography, but also of the historical circumstances that shaped the man – and the powerful office which he holds.

Joan Biskupic is a lawyer, legal analyst, and journalist for CNN. She has authored several profiles of Supreme Court judges, including Sandra Day O’Connor, Antonin Scalia, and Sonia Sotomayor.

Chief Justice John Roberts’s father, John Roberts Sr., was born to a family of Irish immigrants who worked their way to middle-class respectability in the steel industry in Johnstown, Pennsylvania. Roberts Sr. attended the University of Pittsburgh. He married in 1952, shortly after graduating, and became an electrical engineer with Bethlehem Steel at their plant in Lackawanna, New York.

Roberts’s mother, Rosemary, was from a family of Slovakian immigrants and a more working-class neighborhood in the same city. Rosemary dedicated herself to raising her children at home and aiding her husband’s ambitions. John Roberts Jr. was born in 1955. Roberts’s three sisters, Kathy, Margaret, and Barbara, doted upon him throughout his life.

In 1965, Roberts Sr. was promoted to Bethlehem Steel’s new plant in Burns Harbor, Indiana. He moved the family to Long Beach, an affluent and exclusively white Indiana suburb, where Roberts Jr. enjoyed an idyllic childhood. Roberts Sr. became a superintendent, and later, the assistant general manager of ...

Four Ways of Looking at the Radicalism of Joe Biden
9
Weird
8
No Stopping Us Now
9
What You Should Know About Politics . . . But Don’t, Fourth Edition
7
American Hustle
8
The Election That Could Break America
7