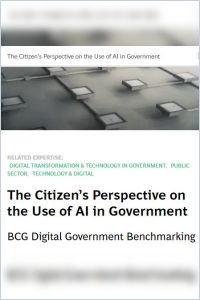 Are people generally for or against using artificial intelligence (AI) in government services and operations? Or, is public opinion more nuanced? The Boston Consulting Group queried more than 14,000 people via the internet to answer these questions. The biannual 2019 Digital Government Benchmarking study makes required reading for anyone interested in the future of tech in government.

AI and other technologies can bring big improvements to government, but their use is controversial.

Government applications of AI include robot-staffed customer service centers and instantaneous, data-informed traffic optimization. Machine learning and algorithms can help shape predictive models. But many people urge caution in applying these technologies. Algorithms can amplify human biases hidden in the data sets, and machine learning’s logic or decision-making pathways can surpass human understanding. So how should governments use such tech?

People generally support most government applications of technology – with some notable exceptions.

A 2019 internet survey of more than 14,000 respondents worldwide showed that most people supported 12 of the survey’s 13 use cases for AI in government. People have generally warmed to AI applications – such...

The Panopticon Is Already Here
9
Biased AI Is Another Sign We Need to Solve the Cybersecurity Diversity Problem
7
Expanding AI’s Impact with Organizational Learning
8
AI Government Procurement Guidelines
9
Can Computers Ever Replace the Classroom?
9
Thriving in the Augmented Age
7