Summary of The Coming Prosperity 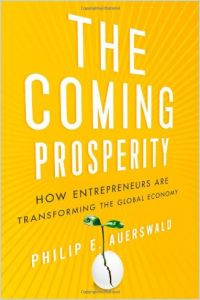 This iconoclastic, deeply informed book by economist Philip E. Auerswald contests conventional pessimistic thinking on some big issues – from recession to global warming – facing humanity in general and business and government in particular. He says the solutions lie in the millions of people who are rising up from economic exclusion to become entrepreneurs. Writing – sometimes with a dash of humor – from the unrepentant point of view of an economist, Auerswald uses a rigorous theoretical economic framework and compelling case histories to set his book apart from other arguments for confidence about the future. He combines scholarship about everyone from Adam Smith to Joseph Schumpeter with personal anecdotes about his development and the evolution of his thinking about the future. Occasionally, the personal jars a little with the grand theory. Auerswald is the first to note his book’s obvious flaw: the lack of a detailed plan to achieve the rosy outcomes he predicts. A more disciplined focus and fewer argumentative swerves might have paid dividends. He offers an approach to solving intractable problems, rather than the solution itself, but getAbstract finds his realistic reticence and his optimism worthy of respect.

Economist Philip E. Auerswald is an associate professor of public policy at George Mason University and a senior fellow at the Kauffman Foundation. He is also the co-founder and co-editor of Innovations, a quarterly journal about entrepreneurial solutions to global challenges.

Societies around the world face real problems – from unemployment, debt and global warming to population explosion, water scarcity and global terrorism. The West confronts additional threats in the rise of apparently unstoppable low-wage competitors, such as China, India and Brazil, and in hitting boundaries to additional technological progress. Everywhere you look, you see reasons to worry – lots of them all too real. Many people believe their entrepreneurial dreams could fall into a nightmare of permanently bad economic circumstances.

In fact, the opposite is true. Society is heading for decades of unprecedented prosperity founded on 400 years of scientific and technological advances. Expect the future to bring worldwide, self-sustaining development involving people who have been excluded from the world economy until now. Thousands, possibly millions, of entrepreneurs will impel this new affluence. They will create seismic change, and not just to gain money but also to achieve meaning, impact and status.

Examples abound of “social entrepreneurs” who have wrought tremendous change. Consider Karim Khoja, who was responsible for setting...