Summary of The Confession 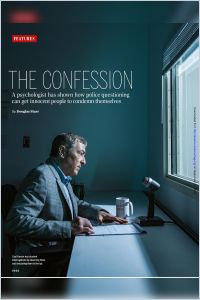 Nothing can be more devastating to a law-abiding citizen than to be convicted of a crime he or she didn’t commit. Yet, as Douglas Starr explains in an eye-opening article, many wrongful convictions are partly based on the innocent suspect’s own admission of guilt. Psychologists are now starting to learn that people are more prone to false confessions than previously thought. Their findings have prompted a rethinking of conventional law enforcement methods and processes. The article will interest anyone concerned about a well-functioning criminal justice system.

Douglas Starr is a journalist based in Boston.

False confessions happen more frequently than you might suspect.

In 1991, the Bronx District Court wrongfully convicted 16-year old Huwe Burton after the alleged suspect confessed to a murder he didn’t commit. Psychologist Saul Kassin, a leading expert on interrogation, has found that Burton’s case is no exception. According to the Innocence Project, more than a quarter of the 365 wrongful convictions the NGO helped to overturn involved a confession by the innocent suspect.

Several factors can increase people’s vulnerability to succumb to interrogation pressure and admit to their alleged wrongdoing. These factors include a suspect’s young age, mental impairment and substance addiction. Adolescents, in particular, are easily intimidated by authority and are vulnerable to being “persuaded” during interrogations that they did something they didn’t do.

The go-to training manual for US police is based on an interrogation technique developed by former Chicago detective John Reid in 1962. The technique teaches interrogators to start with...