Summary of The Dark Genius of Wall Street 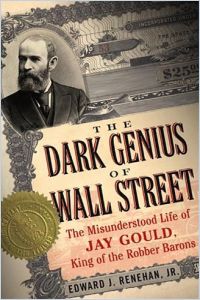 This biography of Wall Street baron Jay Gould is in some ways a primer on how American media and public opinion seem to demonize capitalists who succeed at doing what capitalists are wont to do, namely, making money. Of course, Gould was no ordinary capitalist. His ruthless tactics gave his enemies a big target to dislike. After all, when you single-handedly create an investment bubble that leads to a crash in the price of gold, resulting in congressional hearings aimed at placing blame, you expect to make a few enemies. Veteran biographer Edward J. Renehan paints a fair, nuanced and colorful portrait of Gould, whose manic focus on business success probably was driven by his tragic childhood. getAbstract strongly recommends this book, especially to students of business history, in the belief that it offers a more in-depth record about an extraordinary and extraordinarily flawed man who was vilified in his time.

Edward J. Renehan, Jr., is the author of more than half a dozen books including The Kennedys at War, The Secret Six and John Burroughs: An American Naturalist. He contributes to various publications and has appeared on C-SPAN and PBS.

In Albany, N.Y., in August 1853, an attorney and political insider named Hamilton Harris received a visit from the principals of the Shakersville Road Corporation. Someone who "appeared to be a small boy, dark-eyed and dark-haired" accompanied the businessmen into Harris' office. The lawyer assumed the youth was a son of one of the company's directors.

The Shakersville Road Corporation had won a contract to build a plank road - a road made of wood - between Albany and Shakersville. People who opposed a section of the road were trying to get an injunction to stop it. If they succeeded, they could delay and possibly halt the project.

Harris began to launch into a rather elaborate description of how he would defend the company from the injunction, but the youth interrupted him. The lad asked if the company could start construction and keep working until an injunction took effect. Of course, Harris replied. When the youth then asked if the attorney could keep them from being prosecuted during construction, Harris realized for the first time that he was not dealing with a kid, but with a company principal. "I told him yes," Harris wrote years later...