Summary of The Deals That Made the World 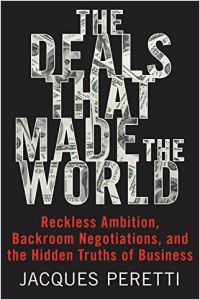 Investigative reporter Jacques Peretti spent years talking to people with firsthand knowledge of backroom negotiations and secret or overlooked deals that had tremendous consequences in various spheres. Peretti’s stories are fascinating. He fleshes out individual actors, provides vivid details of specific meetings and explains their repercussions. Despite his appealing narrative, some readers may question whether the world would in fact be so dramatically different if not for the deals or individual contributions Peretti highlights.

Jacques Peretti is an award-winning investigative reporter for the BBC and a journalist for The Guardian.

When Apple comes out with a new iPhone, the newness alone makes the model so attractive that consumers barely care that its improvements and updates are incremental. The modern commercial history of people’s desire to replace and upgrade may have begun with a clandestine meeting in 1932 of five major light bulb manufacturers. To guarantee their continued business, the companies agreed to limit the life span of a light bulb to six months – and to collaborate to quash any competitor that extended a bulb’s scheduled expiration date.

From then on, manufacturers built “obsolescence” into their products. The light bulb cartel Phoebus agreed how long an object should last and designed it accordingly. Their ploy made people buy more, which was pivotal in bolstering the ailing global economy. By the 1950s, planned obsolescence itself was in jeopardy: Manufacturers knew consumers would realize that certain goods kept breaking – and stop buying. Around that time, GM’s CEO Alfred P. Sloan Jr. thought of a way to manipulate consumers into replacing...