Summary of The Digital Dictators 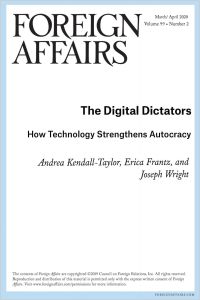 Social media received a lot of credit for facilitating mass protests against despotic governments in the early 2000s. Unfortunately, authoritarian regimes in China, Russia and beyond are becoming increasingly savvy about using tech innovations to further their own ends. In this must-read essay, a group of political scientists use data from the Mass Mobilization Project to warn of a rising technology-powered autocratic wave threatening to repress dissent and undermine democracy around the world. Their findings will fascinate anyone interested in the intersection of politics and technology.

In the early 2000s, the internet and social media empowered citizens around the world to rise up against autocratic regimes.

Between 2001 and 2017, mass movements – including the Arab Spring and successful protests in Georgia, Kyrgyzstan and Burkina Faso – toppled a slew of dictatorships. Popular elections put an end to another 19 authoritarian regimes. Many observers attributed these successes to the internet and social media, which make it easy for people to connect with each other and coordinate mass mobilizations. Since the peak of the Arab Spring in the early 2010s, however, many authoritarian states have successfully clamped down on political and civil liberties by taking control of new technologies and refashioning them for their own purposes.

With China leading the way, autocracies are now gaining the upper hand by repurposing new technologies as tools of popular suppression.

Authoritarian regimes in locales such as Cambodia, Nicaragua and Saudi Arabia have started to leverage new technologies, especially...