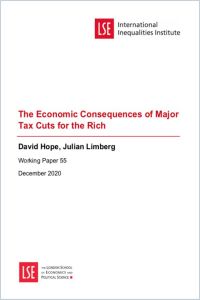 Proponents of trickle-down economics assert that tax cuts for the wealthy lift GDP and lower unemployment. Opponents, however, claim that lower taxes add nothing to the economic engine except to boost wealth and income inequality. Scholars David Hope and Julian Limberg dive into the debate with a fresh analysis of tax policy on high-income earners and come up with important new insights. Executives and analysts interested in the linkages among the tax code, economic performance and inequality will find this an eye-opening, though highly technical, study.

David Hope is a research fellow at the London School of Economics. Julian Limberg is a lecturer at King’s College London.

Since the 1980s, tax rates on the wealthiest residents of OECD nations have fallen dramatically.

Supply-side economic theories, popularized in the 1980s, posit that reducing taxes on high earners will motivate them to work more, thus raising an economy’s GDP. Based on that thinking, many OECD countries have implemented tax cuts for the wealthy in the years since.