Review of The Economists’ Hour 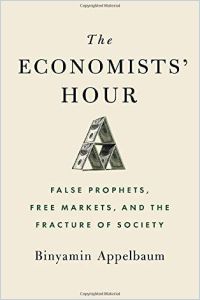 In this insightful study of postwar economic orthodoxy, journalist Binyamin Appelbaum tells how economists Milton Friedman, Arthur Laffer and other free market proponents captured the imaginations of Ronald Reagan, Margaret Thatcher and other world leaders. The results today, Appelbaum writes, are lower taxes for the wealthy and falling incomes for everyone else. He explains why, for example, air travel now is cheap yet miserable, and why laid-off workers in the American Rust Belt will never again earn the incomes they enjoyed before their factories closed.

Binyamin Appelbaum is an editorial writer for The New York Times on business and economics. He previously was a Washington correspondent for the newspaper and a reporter for the Charlotte Observer.

From 1969 to 2008, economists espousing free market theories gained influence in Washington, on Wall Street and around the world.

Appelbaum details how the US economy boomed in the years after World War II and how policy makers drew up rules and regulated commerce with little regard for economic theory. But when the boom subsided, the dismal science came to the forefront of fiscal management. Economists, most famously Milton Friedman and Arthur Laffer, proselytized against government intervention, urging politicians to open up markets, lower taxes and neuter regulations. That approach, according to Appelbaum, certainly bore fruit. With nations trading more freely and goods more readily available, living standards rose across the globe. “The embrace of markets,” the author writes, “lifted millions of people around the world from abject poverty.”

But free market acolytes, Appelbaum asserts, oversold the revolution. The rise of globalization and a harsher economic reality may have been inevitable, but the doctrinaire prescriptions doled out during “the economists’ hour” deepened the pain and accelerated the disruption. Despite America’s embrace of lower taxes and fewer rules, US economic growth has slowed steadily, from more than 3% annually in the 1960s to less than 1% in the 2000s. Income inequality has intensified, and, Appelbaum laments, upward mobility has stagnated; American male children can now expect to earn less when they grow up than their parents do today.