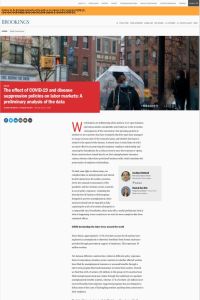 How can governments contain the coronavirus without doing severe damage to workers? The challenge is ongoing, testing policy makers’ mettle and ability to act strategically. In this astute analysis, economists Jonathan Rothwell and Hannah Van Drie look at the initial results of measures taken in 20 nations. Their tour of the countries’ different approaches highlights that those economies doing the best at navigating the treacherous path between physical affliction and economic ruin are focused on buttressing the employer–employee relationship.

Governments have taken different approaches to containing the spread of the coronavirus while limiting economic damage.

Policy makers’ attempts to achieve a sweet spot that controls the spread of COVID-19 and allows the economy to function have varied greatly, as have their results. In a study of 20 advanced nations, different public health measures – such as mandating physical distancing – did not correlate with the extent of economic damage incurred by a country.

“Preliminary results do not suggest any strong tradeoff between disease suppression and economic performance.”

As measured by “a COVID job displacement rate,” deaths per capita and tests per capita, New Zealand, Australia, Denmark and Germany are achieving reasonable success in both containing the virus and maintaining a strong foundation for economic recovery. But the United Kingdom, United States, France and Switzerland are performing poorly, with higher per capita mortality and greater economic disruption. For example, as of April 24, 2020, Germany had suffered 64 deaths per capita, compared to an average of 135 for all 20 countries in the study. At that time, some 20% of Germany’s labor force had enrolled in temporary work arrangements funded by the government, and unemployment insurance claims dipped. Germany’s focus on supporting businesses in an effort to keep people working maintains the connection between employers and employees that is essential for a solid comeback.

“Keeping the economy open has not saved countries from severe economic disruption.”

The economic policies in all four countries emphasize unemployment insurance; Sweden and Denmark also include temporary work programs. Sweden and Iceland both have loose social restrictions, but Sweden’s testing program has been minimal, while Iceland’s has been aggressive: Sweden’s death per capita reached 198, compared to Iceland’s 28. Both countries have experienced economic turmoil in line with that of Norway and Denmark, nations with strict social distancing rules. Widespread testing and selective quarantining seem to be keeping mortality low.

Officials need to understand the importance of the employer–employee relationship to the pace of economic recovery. Replacing fired workers is time-consuming and expensive, entailing orientation and training to attain the productivity of an experienced employee. Historical US data show “that 60% of unemployed workers do not return to their employer.” Accordingly, programs that furlough rather than terminate employees are vital to economic resurgence.

Jonathan Rothwell and Hannah Van Drie are economists at the Brookings Institution.

Why has COVID-19 hit different European Union economies so differently?
7
Fight the Pandemic, Save the Economy
8
Only Saving Lives Will Save Livelihoods
8
The New Economy Drivers and Disrupters Report
8
Capital and Ideology
9
Getting Serious about the Economic Response to COVID-19
8 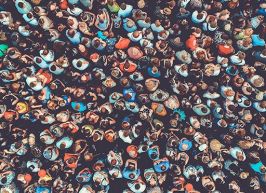