Summary of The Election That Could Break America 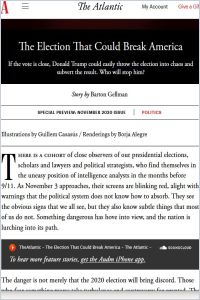 As the 2020 election approaches, President Donald Trump continues to stress his skepticism of the electoral process. Any result that doesn’t favor him, he suggests, is rigged. The coronavirus pandemic plays into this storyline with potentially disastrous results, journalist Barton Gellman reports. Republican voters share Trump’s disdain for social distancing and are likely to vote in person on November 3. Democrats will largely vote by mail. That sets the stage for a chaotic period after November 3 if Trump and his supporters try to claim victory prematurely.

Barton Gellman is a staff writer at The Atlantic and author of Dark Mirror: Edward Snowden and the American Surveillance State.

US election law experts warn that the 2020 presidential election is unlikely to produce a quick result. In the worst-case scenario, a close result could lead to a constitutional crisis – one that would make the contested result of the Bush versus Gore election in 2000 look mild. It doesn’t take a wild imagination to envision the result remaining in dispute all the way to Inauguration Day on January 20, 2021. It’s also possible that Trump, with his undemocratic leanings, could test American democracy by refusing to peacefully relinquish power.

Trump is unlikely to accept any outcome that doesn’t show him victorious. After he won the 2016 election, despite a popular vote deficit of 2.9 million ballots, Trump invented a scenario in which 3 million illegal immigrants had voted for Hillary Clinton. During the...

Does mail-in voting lead to fraud – and does it help Democrats? The facts
8
What You Need to Know About Voting – and Why
8