Summary of The End of Power 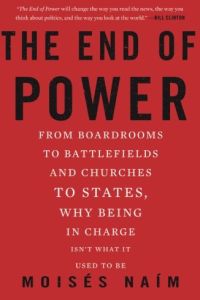 Surprised by the limitations on his power after he became a senior government minister in Venezuela in 1989, Moisés Naím explores whether other powerful people and organizations have experienced a similar erosion of influence. His sweeping examination of how people and institutions acquire, use and lose power offers insights into why governments can’t get anything done and how obscure start-ups can abruptly displace rival giants. Conglomerates, organized religion and powerful nations still enjoy great power, but Naím provides evidence that today’s more dispersed power proves easier to obtain and to lose, but harder to exercise. His argument ranges across politics, war, business, philanthropy and religion. getAbstract recommends his analysis to anyone interested in the broad trends that shape society. Naím’s other recommendation comes from Facebook founder Mark Zuckerberg, who selected this book as the first entry on his public reading list and, by so doing, made it a bestseller.

Moisés Naím is the former Venezuelan trade minister and editor of Foreign Policy Magazine. In 2014, he was named among the world’s 100 leading thinkers.

Though the concentration of power has waxed and waned over the centuries, the influence of the powerful has grown since the Industrial Revolution. Since the early 1900s, nations, the church, institutions and organizations have gotten larger and more complex, acquiring greater reach and power. As a result, the world is now a more stable, secure place. Since World War II, democracy has flourished and has fostered stabilizing international institutions like the United Nations.

The Great Depression, which punished small players, and both world wars, which required mass, national organization, led people to believe in concentrating power in big governments, large corporations and other dominant institutions. The end of World War II saw the growth of GM and IBM, as well as large...

Geofusion
8
The Square and the Tower
8
The Russian State and Russian Energy Companies, 1992–2018
8
The Pioneers
9
Cascades
8
Beyond Sunni and Shia
7