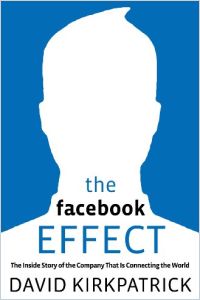 Statistically speaking – if Facebook and the internet keep growing at a steady rate – by 2013, every internet user will have a Facebook page, a remarkable achievement for an organization in operation only since 2004. In fact, Facebook is the best networking platform ever. Writer, editor and technology expert David Kirkpatrick examines its amazing start-up and covers “the Facebook effect,” the singular phenomenon that enables people globally to connect in new ways. Facebook is ubiquitous, with far greater penetration than any other mass medium. Most intriguing, information can bubble up from Facebook users and quickly spread from one online “friend” to another across an immense social network of nearly 500 million users worldwide. Kirkpatrick nails Facebook’s complex corporate biography and, even more tellingly, captures the personalities of the innovators involved, particularly genius CEO Mark Zuckerberg. getAbstract recommends this book to all Facebook members, which if current trends continue, soon will be everyone online.

David Kirkpatrick is a Fortune magazine editor and author of its Fast Forward column. A leading authority on technology, he developed Fortune’s Brainstorm conference.

Ten Million People in the Street

Facebook is an immensely powerful internet application, or in CEO Mark Zuckerberg’s term, “utility.” For example, on Jan. 4, 2008, Oscar Morales, a civil engineer in Barranquilla, Colombia, created a Facebook group opposing Colombia’s Revolutionary Armed Forces (FARC) rebels and their terrorist tactics. He named the group Un Millón de Voces Contra Las FARC (“One Million Voices Against FARC”). By the next day, 1,500 people had joined; by that evening, 4,000 had signed up. Via Facebook, Morales proposed nationwide marches against FARC. But Facebook group members worldwide told Morales they also wanted to march in their countries. On Feb. 4, a month later, some 10 million people across Colombia joined in marches against FARC, as did two million more globally, from Buenos Aires to Tokyo, because of a one-month-old Facebook group that began with one angry member.