Summary of The Fear Factor 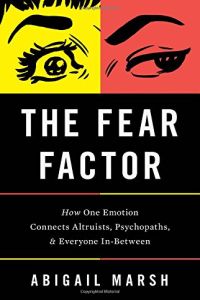 Psychologist Abigail Marsh was only 19 years old when a stranger saved her life. This transformative event sent her on a trajectory to discover what makes some people put their own well-being at risk for strangers. Functional magnetic resonance imaging (fMRI) brain scans of psychopaths and extraordinary altruists led to a major discovery: The most powerful predictor of altruistic behavior is the ability to recognize fearful facial expressions. Psychopaths lack this ability and have a muted fear response themselves, but extreme altruists show a heightened reaction. Marsh brings laboratory research to life. Her underlying message is one of hope and faith in the goodness of humankind. Readers interested in what makes polar opposites like the Hannibal Lecters and the Mother Teresas of the world tick will relish this eye-opening psychology detective story.

Abigail Marsh is a tenured professor of psychology at Georgetown University and directs its prize-winning Laboratory on Social and Affective Neuroscience.

In 1996, when Abigail Marsh was 19 years old, she swerved on a highway to avoid hitting a small dog. Her car spun into the fast lane facing oncoming traffic and slid to a stop. As cars narrowly swerved past her, she believed she was going to die. Suddenly, a man’s face appeared at the window.  He had parked his car and run across four lanes of highway traffic at night, a black man risking his life to save a white stranger.

He drove her car safely to the side of the freeway. After making sure Marsh was OK, he got back in his own car and drove off. Marsh was so dazed that she doesn’t remember now if she thanked the man, and she never learned his name. The rescue inspired her to research and try to understand the origins of altruism. In 1999, she began graduate work in social psychology at Harvard University.

Moral typecasting is one reason people have difficulty understanding altruists. People are either “moral agents” or “moral patients.” Agents commit an act, either positive or negative; patients...