Review of The Fifth Risk 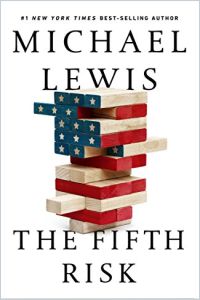 Anecdotes about entitled, wasteful and irrelevant government bureaucracy may abound in modern America, but, according to best-selling non-fiction author Michael Lewis, the belief that government is only out to serve itself could not be further from the truth. During the 2016 election, Donald Trump presented himself as the ultimate outsider – a position which resonated with many in the heartland who felt left out of the American Dream. Those voters cheered Trump’s promises to cut governmental bloat. To the people who ran Washington’s various departments – including the Departments of Energy, Agriculture and Commerce – Trump’s election was ominous, however. How would “draining the swamp” affect their important work?

Lewis takes readers through the bizarre transition of government that followed the election of Donald Trump in 2016. One by one, senior officials who have devoted their lives to keeping Americans safe and healthy tell of the ignorance and indifference with which the new president’s people approached the task of governance. Though often poorly named, the US government’s various departments perform essential work – not easily duplicated – that makes Americans safer and more prosperous, Lewis argues. Indeed, in an organization that employs two million people, 70 percent work in the field of risk management. Lewis’s book underscores why every American should worry about the risks that the Trump administration poses to their country.

Michael Lewis is a financial journalist and the best-selling non-fiction author of Liar’s Poker, Moneyball, The Blind Side, The Big Short, and The Undoing Project.

US presidential transitions have always been problematic because of gaps in institutional knowledge.

Presidential transitions have always been a problematic part of the American political system. Many of the high-level positions in the federal government are political appointees who come into their jobs with little institutional (and sometimes subject area) knowledge. This lack of understanding can have far-reaching effects, Lewis writes. A badly handled transition not only decreases the efficacy of the incoming administration, it also puts the American people’s safety and well-being at risk.

New presidential transition-related laws, passed between 2010 and 2012, provided office space for presidential transition teams prior to inauguration, eased hiring by reducing the number of jobs that required Senate confirmation, and required outgoing presidents to prepare materials and briefings for incoming appointees. The 2016 transition was the litmus test for these new laws; but, Lewis notes, perhaps, no legislation could have helped ease the changing of the guard that year. Though Donald Trump’s advisers, including former New Jersey governor Chris Christie, attempted to follow the law and established a transition team, Trump resisted their efforts. The senior career bureaucrats in the various government departments who had assiduously prepared detailed briefing materials waited after election day for Trump’s people to show up, but in most cases, no one did.

Russian Roulette
8
Does mail-in voting lead to fraud – and does it help Democrats? The facts
8
American Hustle
8
A Foreign Policy for the Post-Pandemic World
8
Trumpocalypse
9
The Cambridge Analytica Files
9