Summary of The Financial Services Guide to Fintech 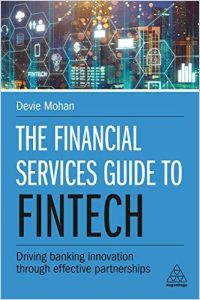 No industry or business is immune from what economist Joseph Schumpeter termed creative destruction, including banks. For more than a century, banks ruled, but that began to change in the early 2000s, when the sector faced an emerging competitor: fintech. Expert Devie Mohan explores the developing fintech space across a variety of factors, including its future trends. Financial executives, consumers and fintech disrupters will discover keen insights and a reservoir of knowledge in this robust work.

Devie Mohan is a fintech marketing strategist and research professional.

Long immune from competition, the banking and financial sector finally faced the threat from the disruptive force of fintech after the 2008 global financial crisis. The wreckage from the economic implosion changed the landscape of financial markets. In the United States, bailouts rescued Wall Street and the affluent, but they did little to assuage the average American. Main Street consumers were incensed, and their distrust of financial institutions boiled over, leading them to explore other avenues by which to handle financial transactions.

Covid-19 Has Scrambled Fintech’s Winners & Losers
7
Blockchain Babel
8
Perpetual Debt in the Silicon Savannah
7
Every Company Will Be a Fintech Company
7
AI Will Give Rise to FinTech 2.0 and Longevity Banks
7