Review of The Forgotten Depression 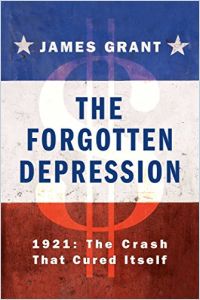 From the Great Depression to the Great Recession, massive government stimulus is an automatic response to economic downturns. But what if the public sector let the business cycle just run its course? Economic historian James Grant answers that question in this crisply written study. Arch and contrarian, Grant is a joy to read and, for those who subscribe to Keynesian economics, a shock to the system. He makes no secret of his point of view: Government bailouts are folly, and economies can heal themselves without stimulus. To prove his point, Grant provides this entertaining history of the “forgotten depression” of 1920-21. Since Grant is the editor of Grant’s Interest Rate Observer, a publication with an annual subscription price of $1,175, this book offers a chance to explore his erudite insights on the cheap. With an unconventional outsider in the White House, Grant’s against-the-grain perspective seems significant.

James Grant is editor of Grant’s Interest Rate Observer, a twice-monthly publication. His books include biographies of John Adams and Thomas B. Reed.

Grant begins his tale in 1920 when the US economy was in a tailspin. By today’s standards, the federal government’s ability to respond to a crisis was primitive. Economics was a little-known niche and official economic statistics were sparse and unreliable. The Federal Reserve, only a few years old, had never dealt with a crisis. The gold standard ruled the dollar, and ruled out wholesale printing of currency. These factors added up to a Keynesian nightmare: The US faced a depression, and government proved nearly powerless. While Grant is unlikely to derail decades of economic orthodoxy, and he seems dismissive of the personal costs of a depression, his unique outlook about history on the brink might provoke new thinking. By the end of 1921, the US economy began to accelerate, an event Grant cites as incontrovertible proof that government should butt out of economic processes, no matter how catastrophic.

The boom that followed quickly morphed into the Roaring Twenties. What Grant calls “America’s last governmentally unmedicated depression” became a historical footnote – and never served as a model for responding to economic crises. Grant compares the depression of 1920 with the Great Depression of a decade later. The 1920 depression lasted 18 months, from January 1920 to July 1921. The feds responded to the Great Depression of 1929 to 1933 with a massive stimulus – and that downturn lasted more than twice as long. The Great Recession of 2007-2009 provoked an ambitious federal response, including money printing and what Grant derides as “financial market manipulation.” In his view, 1920-21 proves government’s best response is no response at all.