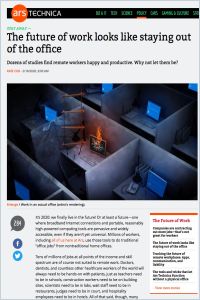 The coronavirus pandemic has led to a proliferation of articles touting the pros and cons of telecommuting. Yet the concept isn’t new, as technology policy reporter Kate Cox explains in her Ars Technica article. Working for one of the first all-virtual newsrooms in the United States, Cox may naturally favor the many advantages she finds that telecommuting brings to both companies and employees. Her perspective offers a concise overview of how companies benefit from hiring remote workers.

The concept of remote work has been around since the 1970s.

The term “telecommute” first appeared in a 1974 article in The Economist predicting that remote work would become common by the end of the 1980s. Futurist Alvin Toffler’s 1980 book The Third Wave (co-written with his wife Heidi Toffler) pointed to the development of new, more widely available and affordable technology that would make telecommuting feasible for many office workers. In 1990, the state of California published the results of a study showing that remote work has many benefits for employers, workers, society and the environment. Additional studies over time reached similar conclusions.

The 1970s idea of large-scale telecommuting blossomed in the first decade of the 21st century. The Pew Research Center reports that in 2000, about half of the adults in the United States had internet access. By 2010, almost 75% of US households had access, and the figure is now about 90%. Broadband reached 60% penetration by 2010, though 42 million-plus Americans still...

How Companies Can Respond to the Coronavirus
8
Work for a Brighter Future
9
Coronavirus and Teleworking Employees: Set Guidelines, Priorities
8
The 15 Objects That Defined 2020
8
You’re Not Going Back to Normal Office Life for a Long, Long Time
8
Why Remote Work Is So Hard – And How It Can Be Fixed
9