Summary of The Geography of Genius 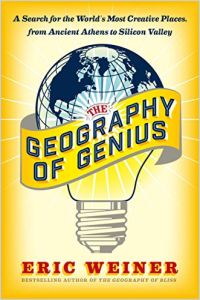 Best-selling author Eric Weiner asks why “genius clusters” have formed in certain places at various times in history. Seeking an answer, he went to those places: Athens, Hangzhou, Florence, Edinburgh, Calcutta, Vienna and Silicon Valley. He discusses why geniuses become marginalized members of society; how drinking establishments, clubs and coffeehouses foster creativity clusters; and why many geniuses were prolific in several fields. Weiner explores the nature of genius as well as the environments that foster its development. Happily, he stops short of drawing specific conclusions. getAbstract recommends his smart, witty and engaging exploration of the places that spawned world-changing advances in art, science, medicine and other endeavors.

Eric Weiner is the author of The New York Times bestsellers The Geography of Bliss and Man Seeks God, and is a former foreign correspondent for National Public Radio.

Artificial intelligence researcher Margaret Boden defines creative genius as “the ability to come up with ideas that are new, surprising and valuable,” the same criteria that the US Patent Office uses to issue patents. In 1869, natural scientist Sir Francis Galton, an avatar of statistical analysis and forensic fingerprints, defined a genius as someone “to whom the world deliberately acknowledges itself largely indebted.” The “Fashionista Theory of Genius” holds that no genius can self-declare; other people must confer that title.

University of California professor of psychology Keith Simonton noted that “genius clusters” have arisen in various places throughout history. Seeking to understand what inspired that flowering of creativity, he asked “Where is?” rather than “What is?” in seeking to understand the role of culture in producing the “genius clusters” of 1900 Vienna, Renaissance Florence and other historical incubators. To pursue that quest, begin, of course, with the ancient Greeks.

The ancient Greeks gave the world democracy, science, coins and written contracts. But Athens in that era was a small, dirty, smelly place. Chaos...