Summary of The Global Risks Report 2017 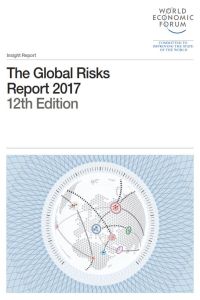 The world is certainly fraught with risk – humanity faces the potential for massive terrorist attacks, the use of weapons of mass destruction, climate change fallout and data manipulation, to name a few. These risks are multiplying in a global environment in which populism is on the rise, the democratic process is coming under siege, and technological change is pushing new ways to work and live. The World Economic Forum provides comprehensive, data-driven intelligence on these threats and their probabilities. getAbstract recommends this sobering analysis to risk managers, business executives and policy makers.

The World Economic Forum is an independent global organization that engages leaders of business, politics, academia and society to improve the state of the world.

The Most Likely Risks and Their Impacts

Based on a survey of 750 of its members, the World Economic Forum identified the global risks most likely to occur in 2017, in order of their probability:

And the risks likely to have the most severe impacts, were they to happen, are:

Critical challenges for 2017 and beyond stem from five main areas: the economy, society as a whole, technology, world politics and the environment.

Following the 2008 financial crisis, nations focused their monetary policy on attempts to generate growth. But, productivity growth has been slow to materialize in the wake of the financial crisis. Instead, these measures have channeled “income toward debt servicing rather than fresh consumption...

The Global Risks Report 2019
8
Capitalism, Alone
9
The 2018 Report of the Lancet Countdown on Health and Climate Change
8
The New Economy Drivers and Disrupters Report
8
Can We Have Prosperity Without Growth?
8
Global Inequality
9