Summary of The Grid 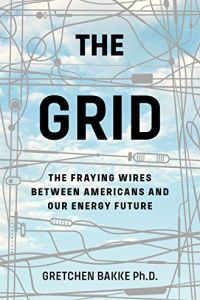 Cultural anthropologist Gretchen Bakke explains that the United States leads the developed world in power outages due to the unreliability of its grid – the complex nationwide system of making and delivering electricity. Bakke describes the development of the flawed US grid and outlines its challenges. For example, she explains, since the power industry has no effective way to store electricity, its generation and consumption always occur simultaneously. You might wish Bakke had told you more about how America could improve the grid’s resiliency in the future, but she covers a lot of ground even so. getAbstract recommends her book to investors, policy makers and entrepreneurs who want to learn what is wrong with the US electrical infrastructure and why.

Cultural anthropologist Gretchen Bakke, PhD, spent the first half of her career doing research on failing nations and the second half investigating failing infrastructure.

On August 14, 2003, the largest blackout in US history hit the Eastern side of the country, leaving eight states without power for two days. Inadequate investment in maintaining transmission wires preceded the blackout. An untrimmed tree near a high-voltage line disabled much of “the grid,” the complex nationwide system that produces and delivers America’s electricity. The US grid is really three grids: one for the Western side of the country, one for the Eastern side and a smaller one for Texas alone.

At least 70% of the grid’s transmission lines and transformers are 25 years old, and the average age of US power plants is 34. The United States has more outages than any other developed country. And the duration of outages is increasing. From the 1950s to the 1980s, the annual number of major power outages in the US rose from two to five. The annual number jumped to 76 by 2007 and to 307 by 2011. Overgrown foliage is the biggest impediment to keeping the electrical infrastructure reliable and secure.

Electricity defies storage for later use. The generation of power and its consumption are simultaneous, even if the user is hundreds...