Summary of The Half Has Never Been Told 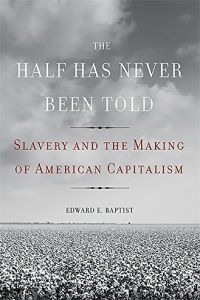 Political compromise and profit motives preserved slavery at the United States’ birth and kept it expanding for a century. Slavery wasn’t merely a backward institution ended by the Civil War, a common assessment. Instead, historian Edward E. Baptist asserts that it underwrote American wealth and power and inspired modern capitalism. Charting the parallel growth of cotton and the rosters of enslaved people, Baptist details the intricate relationships between slavery and the US economy. In the process, he brings to life the people whom slavery had turned into commodities.

Edward E. Baptist, PhD, teaches history at Cornell University and is the author of the award-winning Creating an Old South.

A half-million enslaved Africans lived in the original 13 American colonies.

In early America, race-based slavery built a powerful tobacco industry along the Virginia and Maryland coasts. African slaves had no rights; US law saw them as property and defined enslaved women’s children as slaves. The drafting of the US Constitution included political compromises that gave economic incentives to slavery. Each slave counted as three-fifths of a person in the census that set each state’s number of representatives and electoral college delegates. In 1793, Congress passed the Fugitive Slave Act, saying runaway slaves belonged to their enslavers.

Before 1800, Caribbean sugar drove the international slave trade. In 1791, slaves on the island of Saint-Domingue (now Haiti) revolted, killing their masters and torching plantations. The rebels defeated the army that Napoleon sent and founded Haiti. Napoleon sold the Louisiana territory, including New Orleans, for $15 million, instantly doubling the nation’s size.