Summary of The Happiness Hypothesis 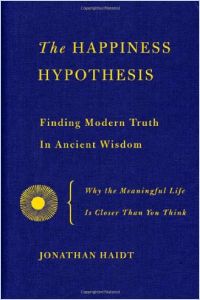 Bits of wisdom fly at us constantly from fortune cookies and the like. Perhaps because of this, you may only rarely stop to savor a great idea and make it your own. Author Jonathan Haidt provides a remedy to modern habits of superficial thinking with this accessible update on 10 great ancient philosophical themes, examined within a scientific framework of positive psychology. He demonstrates that the questions of the ages are still worth kicking around. getAbstract recommends this book to those who want to know why change is so difficult and happiness so elusive. It will give you plenty to think about and possibly change your life. At the least, it will point you in a positive direction.

Jonathan Haidt is an associate professor at the University of Virginia, and a social psychologist who focuses particularly on human morality. He co-edited Flourishing: Positive Psychology and the Life Well-Lived.

Before Freud, both Plato and Buddha described the divided self. To Plato, the psyche was a charioteer, our reason, guiding the wild horses of our passions. Freud’s update depicted ego as a carriage driver, id as the wild beasts pulling the carriage and the superego as the driver’s father who tells him what he’s doing wrong. Perhaps Buddha’s simple metaphor of the split mind - as a rational rider atop an irrational elephant - is the most useful.

The brain has two hemispheres with different strengths. Split-brain research says the left brain will conceive a likely story to explain behavior, though it isn’t privy to accurate data. It does this in a matter-of-fact way, with no idea that it is concocting a tale. This brain module maintains a running, convincing dialogue as part of the "makes sense" function of thought. We rarely feel a need to go beyond a plausible explanation.

The human brain evolved slowly from a merely reactive organ into a useful tool for reasoning and planning. With the brain’s expansion to house the intellect, we gained a greater range and deeper capacity for emotions, located, scientists say, ...