Summary of The Heart of Leadership 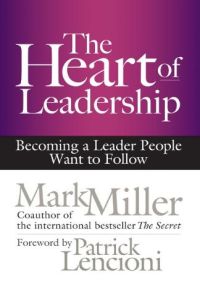 Author and Chick-fil-A vice president Mark Miller presents a book-length teaching story – a fable – about learning to lead. He dispenses leadership wisdom through the story of a career-oriented, personal journey. His protagonist, Blake, interacts with different people while learning the meaning of true leadership. Miller explores the core of “leadership character,” without which – despite other gifts – no one can lead. Miller’s readable story, while deliberately and comfortably predictable and simplified for novice leaders, is easy to digest and offers many valuable concepts about leadership qualities. getAbstract recommends this basic, accessible primer on the essence of leadership. If you’ve read Miller’s books written with Ken Blanchard – The Secret: What Great Leaders Know and Do, Great Leaders Grow or The Secret of Teams, you’ll be right at home here. This is an equally useful, straightforward and structured lesson.

Mark Miller, a vice president of Chick-fil-A, has sold nearly 600,000 copies of his books across the globe. He writes a leadership blog and is the author of several other leadership bestsellers.

Blake Brown was unhappy and disillusioned. Though he was an outstanding performer at Dynastar, Blake learned from his supervisor, Samantha, that he wasn’t going to get the promotion he thought he deserved. “You’re a great individual contributor, but I couldn’t get enough support for you to become the team leader,” Samantha said. Blake didn’t understand. “Outstanding performance – no promotion?” he asked.

Samantha agreed that Blake was a terrific worker. “But there’s something missing,” she explained. Blake asked what he lacked. Samantha couldn’t explain exactly. She said leaders are different from average employees and that Blake simply didn’t display leadership potential. Blake asked her what makes leaders special. “I’m not sure how to describe it, but I know it when I see it,” she responded. She told Blake that while he might receive a promotion someday, he first had to act like a leader. She urged him to discuss leadership with leaders he respected, since their guidance might help him learn how he would have to change to become a leader.

On his drive home, Blake considered his situation. He had enjoyed a remarkably fast start at his job...

The Secret of Teams
8
The Secret
7